Bett is EdTech’s biggest event of the year, where the global education technology community gets together to spark ideas, create connections, accelerate change, and drive innovation and impact for educators and learners.

After two consecutive years without Bett, a lot has changed in the education sector. The global pandemic brought about unprecedented change in education and in technology- from AI to apps to esports. EDT’s Director and Partner EMEA and LATAM, Ana Isabel Calvo, gives us the highlights and her key takeaways of this year’s event.

Bett 2022, Europe’s largest educational technology event, reopened its doors in London from March 29th to 31st. Despite welcoming visitors from more than 120 countries, the attendance of 400 suppliers, and more than 300 inspiring conferences and sessions, the event was much smaller than in previous years.

This is a surprising fact, especially considering the rapid transformation that learning has undergone during the pandemic. It’s worth remembering that in 2021, investment in educational technology doubled globally with venture capital investment exceeding $20.8 billion. It is no less true that the episodic upsurges in cases of COVID-19 are still keeping many people away from international circuits. In this regard, it is noteworthy that the influx of visitors from Asia was among the lowest in recent memory.

Among other highlights that characterize the effervescent educational landscape, it is interesting to note the rapid growth of solutions focused on artificial intelligence and data technology, and the importance of implementing proposals that allow hybrid programs (combining elements of online and face-to-face) and the interest in empowering educators. Likewise, it is also worth mentioning the strong fragmentation of technological projects, especially in formal education.

Educational applications (APPs) continue to play a leading role in the sector, either as learning projects focused on specific areas of the curriculum or as authoring tools. In this editional of Bett we saw a shift from supplemental or consumer (B2C) projects to institutional (B2B) or mixed (B2B2C) projects. A clear example of this trend is the solution awarded the Most Innovative Project at the Bett Awards, PracticePal, an application for practicing and learning music.

Based on the research about student welfare, especially after the pandemic, a series of technological and intelligent solutions have arisen to help solve many of the problems that we observe in educational institutions on the socio-emotional and health level. In this area projects such as Natterhub (which won in the Transformational Impact category) were featured. We saw other interesting proposals such as Annie Advisor, or Childsafeguarding.com.

Also worth mentioning are various projects for simulators and very powerful virtual and augmented reality elements for both formal and higher education. Otherwise, little else was new: visitors found the usual list of educational platforms and systems for classroom management, evaluation-planning, and technical support. As well as numerous devices for personal and classroom use.

The EdTech industry’s interest in supporting families has been reaffirmed. To a large extent, younger students have been especially vulnerable during the pandemic and quarantines. Families have had to take on the role of teachers. In many cases, it has been an exhausting task, and in some cases, an unattainable activity. The industry has certainly learned from this, with projects such as Your Favourite Teacher, which won the Educational Resource for Parents or Home Learning award, or the finalist Planet Pop. Not to mention the private tutoring market, which was also present, and which according to Facts and Factors’ market research study, is estimated to grow at over 9% annually for the next six years, with a projected value of $174.65 billion.

Perhaps one of the most interesting developments of this edition of BETT is the arrival of esports in the education sector. If we dive into the global esports market, the sector’s valuation in 2020 reached 1 billion dollars while in 2021 it increased to 1.28 billion, and it is estimated to reach 2.89 billion in 2025. This is a further step towards the convergence of the digital and physical realms brought about by the Internet of Things (IoT). For new generations, the boundaries between the digital realm and physical reality practically cease to exist. And education is taking note of this.

In the United Kingdom, for example, esports are classified as games. Students between the ages of 12 and 15 in the UK spend an average of almost 12 hours a week on this type of game. In other words, they spend more time playing games on the Internet than on more traditional activities such as sports or music (OFCOM 2019).

As is the case in other areas, this type of activity done in moderation can be beneficial, improving perceptual and cognitive skills. This is precisely the point that the educational sector is focusing on. It has been shown that the practice of these games has clear links with computer science, STEAM subjects and the development of strategic, commercial and digital actions. It promotes the development of numerous transversal skills (such as teamwork), improves leadership, decision making, problem solving and socialisation, as well as encourages multiculturalism and language learning. Moreover, through competitiveness, the player-student works on certain skills such as reaction times, dexterity and concentration, as well as resilience.

Several initiatives are working on new lines of business in the sector. As already made evident by Microsoft’s acquisition of Minecraft in 2014, this is a very lucrative area of activity. We have already seen Pearson’s partnership with the British Esports Association to create the first qualification for a degree in esports. For these and other reasons, the 2022 edition of BETT could eventually come to be seen as the launch of esports in the educational context. 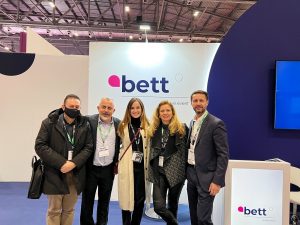 This is a space to share our vision of education globally, in a personal way through our knowledgable and experienced team members, thus allowing you to imagine, inspire and improve your educational vision.

We bring about fast, impactful change in education through our insights, network, global perspective, reach and innovative viewpoints.

A cookie is a file that is downloaded to your computer when you access certain web pages. Cookies allow a web page, among other things, to store and retrieve information about the browsing habits of a user or their equipment and, depending on the information they contain and the way they use their equipment, they can be used to recognize to user.

Technical cookies: cookies that allow user to browse a website, platform or application, and using the different options on services included on these, including those cookies used by the editor to allow operation and management of the website and enable its functions and services, such as controlling data traffic and communication, identifying the session, remembering the items added to their cart, completing the payment process, managing payment, controlling any fraud linked to service security, completing event sign up or participation requests, counting visits for the purposes of invoicing the licenses for the software which allow the service to operate (website, platform or application), using safety elements during browsing, storing contents for video or audio broadcasting, enabling dynamic contents (for example, loading animation for a text or image) or share contents in social media.


Preferences or personalization cookies: cookies that allow to remember information, so that users may access the service under certain conditions that distinguish their experience from that of other users, such as the language, the number of search results to be displayed, the aspect or contents of the service depending on the browser though which or the region from which it is accessed, etc.


Cookies Analytics: They allow the monitoring and analysis of the behavior of the users of the websites to which they are linked. The information will be used for evaluating the activity of our website and compiling reports on website activity in order to introduce improvements based on the analysis of the usage data made by the users of the service.


Advertising cookies: They allow to manage the advertising spaces, in the most efficient way possible, that have been included in our webpage based on criteria such as the edited content or the advertising frequency

For more information about Chrome click on this link.

For more information about Safari click on this link.

For more information about Firefox click on this link.

For more information about Internet Explorer click on this link.

For more information about Microsoft Edge click on this link.
Necessary Always Enabled
Necessary cookies are absolutely essential for the website to function properly. These cookies ensure basic functionalities and security features of the website, anonymously.
Functional
Functional cookies help to perform certain functionalities like sharing the content of the website on social media platforms, collect feedbacks, and other third-party features.
Performance
Performance cookies are used to understand and analyze the key performance indexes of the website which helps in delivering a better user experience for the visitors.
Analytics
Analytical cookies are used to understand how visitors interact with the website. These cookies help provide information on metrics the number of visitors, bounce rate, traffic source, etc.
Advertisement
Advertisement cookies are used to provide visitors with relevant ads and marketing campaigns. These cookies track visitors across websites and collect information to provide customized ads.
Others
Other uncategorized cookies are those that are being analyzed and have not been classified into a category as yet.
SAVE & ACCEPT